The apartment rental market softened in the first quarter, but not as much as expected given a surge in new supply.

The apartment vacancy rate edged up to 4.7% in the first quarter, up from 4.6% in the fourth quarter of 2017, according to data released by Reis Inc. on Tuesday. The vacancy rate jumped from 4.3% a year earlier, while the average apartment rent grew 3.9%, Reis said.

Still, the market has proved to be resilient, given a flood of new supply from developers hoping to cash in from the strong growth rate earlier in the recovery. A sharp slowdown in occupancy and rent growth hasn’t materialized.

“There’s definitely a lot of construction coming online. Even a small increase in vacancy is almost reassuring,” said Barbara Byrne Denham, a senior economist at Reis.

The pace of new apartment construction slowed to just under 40,000 units in the first quarter of 2018. Some analysts believe this was partly because the northeast was walloped by four blizzards in March when construction usually starts to pick up.

Landlords may also be getting a hand from the tax bill that passed in December, which for many renters reduced or eliminated the tax benefits of owning a home instead of renting. The U.S. added about 1.5 million new owner households in 2017, while the number of renter households actually declined by 76,000—a potentially worrying sign for landlords looking to fill large numbers of new apartments.

Home prices grew strongly in the first month of the year, indicating that demand to purchase homes remains high. The S&P CoreLogic Case-Shiller National Home Price Index, which measures the price of a typical single-family home in major metropolitan areas across the country, rose 6.2% in January, down only slightly from a 6.3% year-over-year increase reported in December and still significantly outpacing wages and inflation.

Still, Ms. Denham said the apartment market’s steady performance in the first quarter of 2018 could indicate that the tax bill could slow that shift from renting to owning.

“Now everybody who was on the fence about buying a home and was about to jump in is saying now there’s no incentive to buy a home,” Ms. Denham said.

Only one metropolitan area—Chattanooga, Tenn.—saw rents decline in the first quarter compared with the fourth quarter of 2017. Smaller markets, many of which were hammered by the housing bust, continued to rebound. Phoenix, Sacramento, and Charleston all saw the strongest quarterly rent growth, at 1.5%.

Denver, which has long been one of the hottest markets in the country, experienced the strongest rent growth in the first quarter compared to a year earlier, at 7.6%.

Ms. Denham said construction is likely to pick up through the rest of the year, so challenges for landlords remain and the vacancy rate is likely to continue climbing.

Courtesy of  realtor.com and  credit to Laura 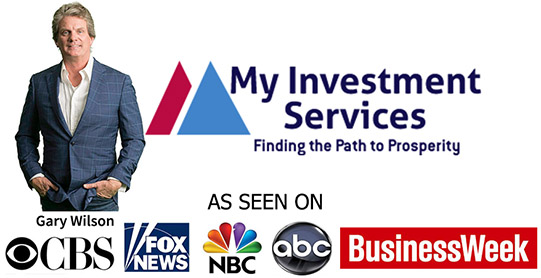